My first day playing around with Vert.x

May 30, 2018
I have been reading quite a lot about Vert.x recently and finally the day before yesterday I sat down and spent some time exploring it by writing some code. Today I would like to present the outcome.

A little bit of history

Like all Reactive frameworks/tool-kits/libraries, Vert.x is inspired by Node.js.
Back when it was released, Node.js shocked many Java developers who looked down on Javascript, on top of owning the Web client side, JS wanted to conquer also the server side!
And thanks to its non-blocking nature, Node.js performed better than typical Java application servers such as Tomcat or Glassfish.
Then the Java world reacted (pun intended) and today Vert.x is one of the most matured reactive technologies for the JVM.

When trying to build my first super-simple reactive (not really) application using Vert.x, I started following this tutorial from the lead developers of Vert.x.
That's great stuff, but I found it a little overwhelming as the first hands-on experience. I understand that the authors are eager to highlight most of the nice features of the technology but I decided to write my own example focusing just in the very basics.

At this point, you may wonder what a verticle is. Vert.x uses its own terminology, I recommend this post in order to get familiar with it. In simple words, a verticle is a Java class whose life-cycle is managed by a Vert.x instance and it can deploy and start other verticles,  it can also communicate with other verticles using the Event Bus.

And here you have the code.
Looking at the pom.xml you'll see that just adding the vertx-core dependency is enough, as usually, Maven will download the required transient dependencies for us: 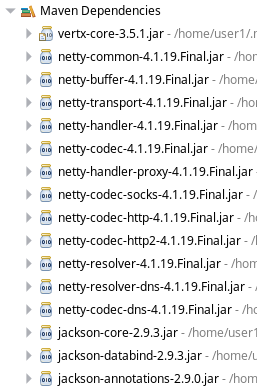 As you can see, Vert.x uses Netty for the network communication (I like that it does not force you to use HTTP only) and Jackson for JSON serialization.

To run the example application you just need to execute its main class class, and looking at the output helps to understand the "everything asynchronous by default" philosophy of Vert.x.
Even the call to start Vert.x is asynchronous, that is why the main method is the first one to finish:

We can also confirm that Vert.x manages the pool of threads for us so we do not need to worry about it.

Since this is a simplistic example, all verticles run on the same JVM/process, but one of the features of Vert.x is its convenience to implement microservices, thus, I could easily refactor the application in order to place each verticle in a different (Maven) module (and run it on its own runtime environment or in different machines) but that's subject for a future post.

Vert.x is a broad topic and I would like to highlight what this post does not cover and I may explore in the future:
- using a different serialization other than JSON (Google protobuffers for example)
- communication with external services (using HTTP or simply TCP or Websockets) either directly or through the Event Bus.
- using Vert.x as the back-end for a Web app (front end could be Angular or React)
- using Vert.x as the back-end for a native mobile app (probably Android since I already have some experience)
- Vert.x cache capabilities (Shared Map)
- using different instances of Vert.x in the same application

You can finally DISLIKE a tweet (and make it count)

October 13, 2017
(If you don't feel like reading you can watch this video  instead) How many times have you wished there was a " dislike " button in Twitter? (and probably also in any other social network, but I will focus on Twitter in this post). And I am not referring to this dislike  button which is not what you want,  since it is just a way to tell Twitter (and no one else) that you would not like to see similar tweets on your feed in the future. So until Twitter decides to add this highly demanded feature (i.e., a real dislike button), I have come up with a way to dislike a tweet and make it count , so you can share your dislikeness   with everybody and your dislikes can be aggregated with other Twitter users'  dislikes . All you need to do in order to dislike a tweet is to use the hashtag #dislike  or just #dl   for short,  when replying to the tweet which you dislike . That's it, so simple! For example, this is the image of a tweet which has two dislikes: But
1 comment
Read more